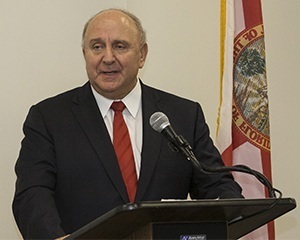 Does history write a new story or will it repeat itself? Rene Perras, Herman Russomanno, Don Slavik and Trevor Goring remember the past. Can we learn from history?

Herman J. Russomanno is the President and Managing Partner at Russomanno and Borrello, P.A. in Miami, Florida. He served as President of The Florida Bar in 2000 during the Bush v. Gore contested election.  He is also a past President of the Florida Supreme Court Historical Society and several other legal and civic organizations.

Earlier in the year I was sworn in as President of the Florida Bar, by then-Chief Justice Major B. Harding. And on June 29, with the Passing of the Gavel, I served under Chief Justice Charles T. Wells. Before the November election, The Florida Bar was facing the greatest threats to the independence of the legal profession. After Bush v. Gore, the threats intensified. I vividly recall the Speaker of the House, for the first time in memory, clearly indicated that he was going to push at the top of his agenda what he referred to as "judicial reform." The Florida Bar would oppose any legislation or proposals that would diminish or take away the Supreme Court oversight of the legal profession, including supervising Bar operations. Justice was indeed under fire.

The Florida Bar Sounds the Alarm

The Florida Bar sounded the alarm for lawyers to vigorously defend the independence of the judiciary, especially at a time when two political action groups had launched campaigns to oust Florida Supreme Court justices they viewed as "liberal" during the contested presidential election. The overwhelming national trauma flowing from the 2000 presidential election had massively accelerated attacks on our judiciary.

We were entering some of the most crucial months in our judicial history. We had to protect our constitutional heritage. Our message was loud  and  clear: The rhetoric must  stop. Trashing constitutional principles must stop. This was a time for healing and not attacking judicial independence. Fortunately, we defeated this draconian legislation.

After the November election, it became obvious that this would be a pivotal moment in our history involving our trial court, the Florida Supreme Court, and ultimately the United States Supreme Court. This would be high stakes litigation with lawyers from throughout the United States calling for eleventh-hour strategies on behalf of Vice President Gore and Texas Governor Bush.

During November and December 2000, the Florida Supreme Court was elevated to the forefront. The world's spotlight was shining on our Supreme Court.  Every action taken, every decision rendered was examined under a microscope. Reporters and crowds gathered around the Supreme Court.

On November 20 and 21, when the court held oral arguments on the emergency appeal on whether or when ballots should be recounted, and then issued its opinion, several hundred protestors waved signs outside the Supreme Court building. I recall Craig Waters, the Supreme Court Public Information Officer, did an outstanding job in briefing the press who were hungry for news. Craig described his work as a "surreal experience." He found himself vaulted to international fame as the post­election vote counting between Bush v. Gore engulfed the court's November 21 opinion.

Don Slavik remembers, “I recall the days after the November 2000 election feeling both alarm and sadness.  Alarm that Roger Stone and his raucous band of vote suppressors would threaten the vote counters trying to discern the hanging chads, and later sadness that the US Supreme Court, in a poorly thought-out decision would stop counting legitimate votes.  And of more concern is the possibility that we will re-live this scenario in the coming weeks.  The Court will lose all legitimacy in the eyes of the majority of voters if it repeats this mistake.”

As Bar President working with the Supreme Court on other matters, I recall Court Marshal William Barnes stating that local police were hired in addition to the Court's 13 full-time security officers to provide everything from crowd control to helping guard the justices themselves. The protestors, extra security, and lined-up TV trucks made it hard to recall that just a few years before, justices talked about being so anonymous they could walk unnoticed as a group across the street to have lunch in the Capitol cafeteria.

"Will we see another high court stakes of political intervention in 2020, 20 years removed from Bush v. Gore?
Joe Biden and Donald J. Trump appear headed to play out this new version of Bush v. Gore. Could this be the dawn of the future litigation Biden v. Trump? Sometimes truth is stranger than fiction, but the proof surely lies in the last 4+ years, from the nomination process in 2015 to Donald Trump becoming president and residing in the White House, where we have continuously been gobsmacked.

The table has been set by the appointment of a new Justice, Amy Coney Barrett, and one week before arguably the most important election in US history. With Justice Brett Kavanaugh who as a political operative back in 2000 and now himself an associate Justice on the highest court in the land. Justice Kavanaugh, as part of the original Republican team tasked with persuading the US Supreme Court, in 2000, that the Florida vote should not be recounted, in Bush v. Gore.

This time Florida may be involved, but more likely it will include, Michigan, Pennsylvania and Wisconsin and their respective state supreme courts to rule and potentially reach the ultimate end, The United States Supreme Court for the final ruling."

Amidst the Madness a Lighter Note

On a lighter note, there were some moments that were memorable.  Right before the Court issued its November opinion, I recall walking to the Supreme Court with several newly elected Board of Governors. As we approached the Supreme Court, members of the press kept asking if we were privy to any decision to be made by the Court. Of course the answer was no. But the press-always questioning any comment-kept pressing. Finally, I told them that I had scheduled with Chief Justice Wells a date when the entire Court would meet as part of the new lawyer Board of Governors orientation. They questioned my statement. We did meet that day with the Court and had a wonderful luncheon orientation. Our meeting had nothing to do with Bush v. Gore.

"In the heat of an unprecedented contentious 2020 election a leading Miami trial lawyer recalls the Florida Supreme Court drama of 20 years ago. Could we be observing another cliffhanger, on the eve of the 20th anniversary of that momentous decision?

One might be tempted to say to Mr Waters. You ain't seen nothing yet! Today the whole world watches as a narrow ideology rules in accelerated life time judicial appointments that have the same agenda as they had in 2000 and which very well could determine the outcome for the next four years and for future generations to come. Canada and the rest of the world watch intently as the US goes into the home stretch of its national election. Like always as the US goes so does the rest of the global community as we are forced to watch, hope and pray. The price of freedom is indeed eternal vigilance!"

This news has been published for the above source. Kiss PR Brand Story Press Release News Desk was not involved in the creation of this content. KISS PR and its distribution partners are not directly or indirectly responsible for any claims made in the above statements. Contact the vendor of the product directly.

This content is published on behalf of the above source. Please contact them directly for any concern related to the above.